Evan Reynolds went 3-3, including a homer and four RBI’s, to lead the Andre Chiefs to a 8-4 win over Alibrandis at Victory Field. Nate Witkowski (1-0) got the win with two innings of work in relief of starter Nick Remy. Andrew Caulfield supplied the game winner with a bases clearing triple in the seventh. Veteran Dave Lightbody had two of Alibrandis six hits.

The Wakefield Merchants unleashed a 13 hit attack and in the process thumped the Malden Maddogs 13-1 at Maplewood. Chris Butler led the way at the plate with three hits and three RBI’s and Steve Rizzuto added a solo homer. Colin Jaena (1-0) allowed just five hits in six innings to record the win.

At Trum, the front running Lexington Blue Sox improved to 18-4-1 on the season in a 10-4 win over the Somerville Royals. The Blue Sox came up with their biggest inning of the season when the first 10 batters reached base and they scored seven runs in the top of the third inning. Ross Curley had two hits and three RBI’s to lead the Lexington offense, which received 15 walks from Royals’ pitching. Mike Geannelis (4-1) went five innings, striking out ten, to grab the win. Blaise Cormiers had two hits and a couple of RBI’s for the Royals. 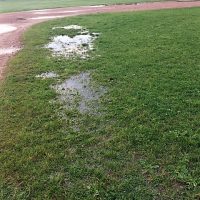