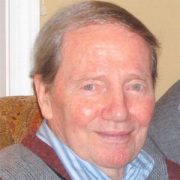 ICL President Emeritus and longtime Wakefield Merchants owner & manager Les DeMarco passed away on Friday, February 2, 2018. He would have turned 89 on Monday.

Les holds the distinction of being the first person elected to the charter class of Intercity League’s Hall of Fame in 2010.

A great man who will be missed.

Born in Wakefield on February 5, 1929 he was the son of the late Joseph and Ruth (Justice) DeMarco.

Mr. DeMarco was raised in Wakefield and was a graduate of Wakefield High School, Class of 1946. During the 1946 baseball season, Les threw two nine inning no-hitters and was later inducted into the Wakefield High School Athletic Hall of Fame. He was drafted by the Philadelphia A’s and played baseball professionally for a number of years. He worked and retired from Fraen Corp. in Wakefield as a Tool and Die maker. Mr. DeMarco had served in the United States Army during the Korean Conflict. He was a member of the West Side Social Club, and coached the Wakefield Merchants for close to 50 years. Les was the president of the Intercity Baseball League for over 40 years and was inducted into the inaugural class of the Intercity Baseball League Hall of Fame. In 2004 he was selected as the Town of Wakefield Citizen of the Year.

Mr. DeMarco was the beloved husband of Phyllis (Stanco) DeMarco, married for 61 years. He was the loving father of Michael DeMarco and his wife Mary Ellen of Woburn, Sharon DeWyngaert and her husband Keith of Fair Haven, NJ, Susan Colson and her husband Jay of Belford, NJ, and Robert DeMarco and his wife Brenda of Middleton. He was the grandfather of Nicole, Lauren, Rachel, Jessica, and Emily DeMarco, Christopher, Catherine, Alexandra, and Emilia DeWyngaert, and Natalie and Ian Colson. He is also survived by many nieces, nephews, and friends. He was the brother of the late Joseph DeMarco, Jr., Robert DeMarco, Paul DeMarco, and Ruth DeFazio.

His Funeral will be held from the McDonald Funeral Home, 19 Yale Ave., Wakefield on Wednesday at 9am followed by a Funeral Mass in St. Joseph Church, 173 Albion St., Wakefield at 10am. Interment will be at St. Patrick Cemetery in Stoneham. Visitation for relatives and friends will be held at the Funeral Home on Tuesday from 4-8pm.

Tweets by iclbaseball
Over 250 Attend 7th Hall of Fame Dinner

2018 Regular Season to Begin May 29, Schedule is Now Posted
Scroll to top