John Russolillo tossed five scoreless frames and Steve Keskinidis picked up a two inning save when the Merchants blanked the Arlington Trojans 1-0 in Wakefield. Scott Searles drove in Brendan Barry with the game’s only run in the bottom of the fifth inning. Lou Tarrantino reached base three times for the Merchants with a double and two walks.

At Morelli Field, the Reading Bulldogs scored a run in the top of the eighth inning to edge the Melrose Americans 2-1. Steve Busby and Nick Berno drove in the runs for Reading and Kyle Devin had a two hit game. Cody Hall (2-0) picked up the win with four innings of one hit pitching in relief of Mike Curtis.

Matt Horan allowed just two hits when the Reds shutout the Andre Chiefs 3-0 in Watertown. Horan (1-1) struck out six. Kyle LaVigne had two of the Reds six hits and, along with Justin Forman, had an RBI. Mike Samko scored the game’s first run after doubling in the fifth inning and also played some sparkling defense at third base. Mitchell Clegg (2-2) took the loss.

In Lexington, Julian Alvarez had a grand slam and a double, accounting for six RBI’s, to lead the Blue Sox to 14-3 win over the Somerville Royals. Thomas Russo and Josh Hassel each had three hits to lead the 13 hit attack. Borja Jones-Berasaluce (1-0) got the win with three innings of 8K relief pitching.

There are no games on the schedule for Thursday. 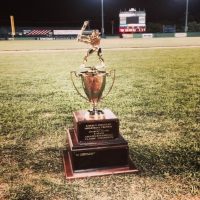