The Intercity League’s Hall of Fame Dinner has been postponed for a second time due to Covid-19 restrictions.

Originally scheduled for this past Spring, it was rescheduled for November 21, 2020, then unfortunately postponed again.

We will announce a new date as soon as it comes available.

Wishing everyone a safe and Happy Thanksgiving.

-ICL Board of Directors

His obituary is below.

PAPPALARDO, Anthony Of Bath, NH, and formerly of Stoneham, MA, passed away on Friday, April 3, in the comfort of his home after losing his battle with cancer. In the last days of his life, he was surrounded by family and loved ones who were able to say their goodbyes and have comfort in knowing he is no longer in any pain. He is survived by his significant other, Cindy Meuse of Bath, NH. Anthony, or Tony as he was known by many, was raised in Stoneham, MA and raised three of his children in town. He was the son of Anthony W. Pappalardo, Sr. and Carmela (DeAngelis) Pappalardo. He was the youngest brother to two siblings: Anna Marchelletta and her late husband Robert, and his late sister Margret Briffett and her late husband Edward. He was the father of 5 children: Michele Conde of Dracut, Anthony Pappalardo of Melrose, Phillip Pappalardo of Billerica, Paul Pappalardo of Phoenix, AZ and Gina Principato of North Reading. Tony spent his early career working in the automobile industry as a car parts manager. He more recently worked in nursing homes as a facilities manager. At the nursing home, he was always entertaining, singing and putting on shows to entertain the residents. He would go out of his way to ensure they were happy and do anything to put a smile on their face. During the last years of his life, he was enjoying his retirement. He was able to live a relaxing, peaceful and quiet life in the small town of Bath. Anyone that knew Tony would say he had a very outgoing personality and loved to be outside. He was always doing projects around the house and yard. He always wanted to stay busy and was never one to sit inside and watch TV. He loved his oldies music and taking long drives during the nice weather. He spent many years playing baseball in the Intercity League on the Medford Mustangs and was inducted into their Hall of Fame in 2011. He was also known for his love for camping and strong will. He also had love for dogs throughout his life. Together, Tony and Cindy shared two dogs, Marley and Max. Marley had a huge impact on his last years of life and would go everywhere with them. Many of his passions and qualities will continue to live on in his children. Visiting Hours: Due to COVID-19, A Memorial Service will be held at a later date.

A MESSAGE FROM INTERCITY LEAGUE BASEBALL
Hope this message finds everyone in the ICL Family safe and healthy.

The ICL is monitoring all directives from federal, state and city officials as it relates to COVID-19. Obviously, we are uncertain as to what those directives will be as we approach the 2020 Summer Season.

The ICL’s Board of Directors will continue to meet remotely to discuss all possibilities for the 2020 season. We will keep everyone informed as developments warrant.

If at all possible, it is our hope to play baseball this summer. 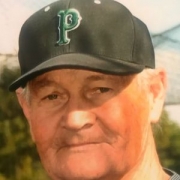 Tommy Mandile, one of the greatest pitchers ever to come out of this area, passed away this week. Tommy played for the Hosmer Chiefs and Medford Mustangs during his ICL career. He played in Chicago Cubs system for many years. At the end of his playing career Tommy became an umpire in the ICL. He was inducted into the ICL Hall of Fame in 2012.

Thomas Michael Mandile, Jr. passed away on his 76th Birthday, March 23, 2020, after a long brave battle with blood cancer.

He was a loving son, brother, cousin, husband, father, uncle, father-in-law, friend and the BEST grampy ever! Tom is survived by those whom he considered his greatest gifts: his wife of 51 years Robin (Adair); his sister Maryanne and her husband Robert Mazaka of Wilmington; his son Tom and his wife Brenda of Winchester; his son Robert (Bob) and his wife Jennifer of Lynnfield and his PRIDE AND JOY ~ his 5 grandchildren Christine, Ann Marie, Irene, William and Ryan.

Tom was born on March 23, 1944, the son of Thomas Mandile, Sr. and Irene (Quinn). He was born and raised in South Medford. He graduated from Medford HS and was drafted as a Pitcher by the Chicago Cubs. Tom pitched in the minors from 1964-68. He made the spring training roster with the big club in ’67 and ’68 where he played with Ernie Banks and pitched against Willie Mays and Hank Aaron.

After retiring from baseball, Tom worked for the phone company for over 20 years. He also worked at the Riverside school for kids in the DSS/DYS system from 1994-2005 where he was a friend and mentor to many.

Sports were always a love for Tom. He loved to play, watch, coach, umpire, and referee. He was the assistant baseball coach at Pingree HS 2000-2018. He was inducted to the Intercity League Baseball Hall of Fame in 2012. He earned the prestigious President’s Award in 2015 from the Eastern MA Umpires Association. But his most favorite pastime was cheering on all his grandchildren at every field, court, rink and dance floor that he could get to. He was loved by so many and will be greatly missed- especially at the Lynnfield DD!

There will be a “Celebration of Life” party to be held at a later date.

The Intercity League has announced its Hall of Fame Class for 2020. The event will now be held on Saturday evening, November 21st at Anthony’s in Malden.
Details will be announced shortly. For Information contact Event Chairman Orazio Azzarello at (617) 839-6843.

Here are the 2020 Hall of Fame inductees: