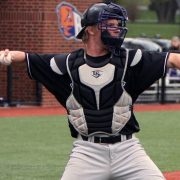 Dan Chaisson, Pete Burgio, and Mike Samko (triple),  had two hits each to lead the Watertown Reds to a 10-4 win over the Wakefield Merchants at Bentley University on Monday night. Mac Jacobson and Ryan Pocock each had a double and two RBI and Will Brennan added a triple for the Reds.  Jonathan Bishop (1-1)  went five innings, struck out seven, and allowed just two hits, to get the win. Chris Hendrix and Matt Horan each tossed a scoreless inning of relief. Scott Searles and Mike Sorrentino both had a couple of hits for the Merchants.

At Maplewood, the Chiefs overcame a 4-0 Melrose lead in the first inning and scored 14 times in the bottom of the sixth to take a 17-5 win. Rookie Anthony DeSouza (1-0) picked up his first ICL win, striking out five in just two innings. Jared Freni had 10 K’s in his five innings of no decision work. Catcher Jordan Pallazola had a big three hit night at the plate which included two doubles, four RBI’s, and his first ICL homer. Mike Burgoyne and Danny DiMare also had three hits each for the Chiefs. Veteran Mike Adessa had two hits for the Americans.

Tony Annino (1-0) got the win and Chris Law chalked up the save when the Lexington Blue Sox held off a seventh inning rally to edge the Reading Bulldogs 4-3 at Endicott College in Beverly. Alex Voitik (pictured above) hit his second homer of the season for the Blue Sox. Hank Oringer and Johnny Hayes had two hits apiece for the Bulldogs. Max Mardany (0-1) took the loss.

On Tuesday, the Somerville Royals host the Arlington Trojans at Trum Field at 8:15 PM.