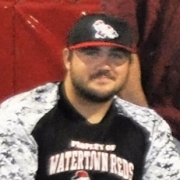 Johnny Hayes’ fifth inning double proved to be the big hit when the Reading Bulldogs came from behind to edge the Andre Chiefs 4-3 at Maplewood. Jack Burke (3-0) went five innings to get the win while Cam Lanzill threw two perfect innings to record the save. Homers by Leivi Ventura and Johnny Welch gave the Chiefs a 3-1 lead in the fourth. Mike Gedman (0-1) pitched well, going five innings and allowing five hits, but took the loss. Tyler Cedeno, Chris Bosco and Jeff Roy had RBI’s for the Bulldogs in the win.

Mike Andrews got the complete game win when the Merchants erased a 2-0 sixth inning deficit to walk off with a 3-2 win over the Somerville Royals in Wakefield. Ryan Collins and Scott Searles (2) delivered the late inning RBI’s for the Merchants. A solo homer from Brady Chant and an RBI double from Jake Cintolo gave the Royals the lead. Andrews (3-1) allowed five hits and struck out seven. Paul Covelle (2-2) took the loss despite striking out 11.

At Morelli, the Watertown Reds used a complete game four-hitter from Nate Beck, and got a homer and four RBI’s from Dan Chaisson (pictured), to turn back the host Melrose Americans 9-1. Beck (1-2) struck out eight. For Chaisson it was his third home run of the season. Kyle LaVigne, Jake Miller and Bryan McGrath added two hits each for the Reds. Dan Cacciola had two of the Americans’ four hits. 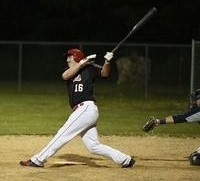 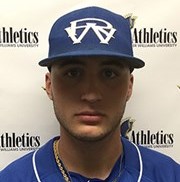