Melrose wins fifth straight to move into tie for first

Lexington – The Americans scored at least a run in each of the first four innings on the way to a 9-3 win over the Malden Maddogs, Sunday morning in the first game of the Jerie DeAngelis Memorial Day of Baseball.

Melrose wasted no time in getting on the scoreboard. After Malden starter Kenny Chaves retired the first two Americans, Chris Hopkins and John Jennings singled to put runners on first and second. Chaves hit Malcolm Nachmanoff on a 1-0 pitch to load the bases. Dave Center, who finished with three RBI on the day, delivered with a single to right scoring Hopkins and Jennings and it was 2-0 Melrose.

The Americans added four more runs in the second, the final two coming on Jennings second home run of the season. The other two runs came on a Will Shackleford sacrifice fly and an RBI single by Hopkins, for a 6-0 Melrose lead.

Malden broke through in the second inning scoring three runs on three hits and two Americans errors. Geoff Lopes, Joe Klingensmith and Pete Maltzan each singled to load the bases with one out. PJ McDonald brought in Lopes with a sacrifice fly for the first run. Klingensmith and Maltzan each scored on errors to cut the lead to 6-3 after two.

After the second Melrose starter Chris Mitchell retired the final nine Maddog batters he faced, the final three in the fifth on strike outs. Mitchell improved to 3-0 on the season and finished his five inning effort with six K’s and gave up four hits.

Jennings finished the day with three hits, three runs and two RBI. Casey Santos-OCampo had two doubles, a run, and two RBI as he doubled in both third inning runs. Hopkins had two hits, scored twice and drove in a run.

Kenny Chaves (0-1) took the loss for Malden. In five innings of work he gave up 11 hits, nine runs, seven earned runs, walked one and struck out four.

Lopes had two hits for the Maddogs and scored a run.

Melrose has now won five straight and moved them into a tie for first with Watertown (7-3, 14 points) at 7-2, 14 points. The victory also snapped a three-game losing streak on the Day of Baseball. 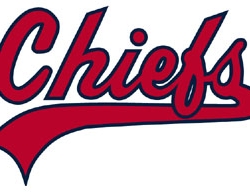